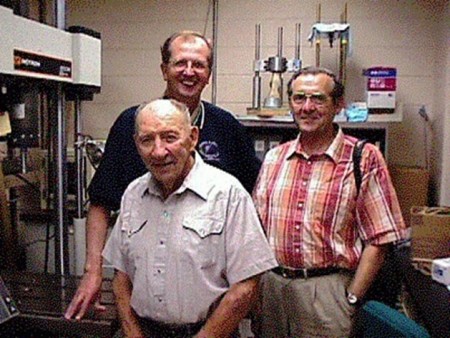 Tuesday November 11 one of the European pioneers of veterinary osteosynthesis and godfathers of AO-Vet International passed away: Frederik Jan (Freek) Meustege

Freek Meutstege was born August 9, 1931 in Eibergen, The Netherlands on the family farm. Inspired by the local veterinarian, he knew from the age of 6 years that he wanted to become a veterinarian himself. In secondary school he met his future wife Wil the Boer and they married in 1955. Freek studied Veterinary Medicine in Utrecht, the Netherlands and graduated in 1956. After mandatory military service he started his career at the Small Animal University Clinic in Utrecht, at the time directed by Prof. G.H.B. Teunissen.

In Utrecht, he specialized in orthopedic surgery that in the 1960-ies mainly consisted of joint (mostly stifle) surgery and fracture treatment using coaptation splinting (plaster of Paris) or intra-medullary pinning and external fixation. He introduced the so called “Meutstege-device” for the treatment of tarsal instabilities. He taught his younger colleagues and students to “always use the simplest method that would result in a predictable favorable outcome” for the patient. Another one of his well-known sayings was that “it is easier to start a surgical procedure under sterile conditions then it is to end one”. He was loved by owners and even in the sixties, they already traveled long distances to have Freek examine their pets. Some owners flew in from Germany and had the airport taxi waiting in front of the clinic before returning back home the same day. However, he did not always fulfil their wishes. He once refused to perform surgery on a 12 years old German shepherd because he was not convinced that the owner could handle an appropriate level of home care.

In 1968 Freek Meustege attended the first AO-Vet course (Arbeitsgemeinschaft für Osteosynthesefragen) in Bettlach (CH). After that he contributed to many AO-Vet courses as a faculty member and enjoyed the opportunity to meet and exchange  ideas with veterinary and human orthopedic surgeons that were meeting in Davos (CH). He was a good and much appreciated teacher both in the Utrecht lecture room as well as during the AO courses. Although he preferred to keep professional relationships formal, the exception to this rule was the AO meeting in Davos where he was among his peers and felt comfortable enough to dance the Polka with his wife Wil during the social events of the course.

In 1975 Freek en Wil Meutstege, together with their two children Peter and Caren spent a sabbatical year at Michigan State University with Prof. Wade Brinker, whom he had met at the AO meetings. He very much enjoyed this period and learned many new fracture fixation techniques, including state-of-the-art plate and screw fixation methods. With Dr. Brinker, Freek shared the high level of concern for soft tissue handling techniques during fracture surgery. He participated in a research project using diaphyseal bone grafts from a newly established bone bank to repair major long bone defects.

In the Netherlands Freek organized several AO-courses for Dutch and Belgian practitioners and invited both national and international faculty to support the course (Drs. Geoff Sumner-Smith, Wade Brinker, Terry Braden, Gretchen Flo, Gary Clayton Jones, Hemmish Danny, Peter Poll, Herman Hazewinkel, Yolanda Krooshof and Richard Nap). He also organized the annual discussion meetings in Utrecht for Dutch and Belgian veterinarians who attended the AO-Vet course in Davos. He was the president of AO-Vet International (1985-1987) and of the International Elbow Working Group (1994-1996). In 1998 Meutstege was honored to be the Wade O. Brinker Visiting Professor at Michigan State University. His relationship with Drs. Wade Brinker and Steven Arnoczky (stifle research) went beyond the professional level and they became close friends.

Freek Meutstege was deeply involved in the dog breed health programs both on the level of the Dutch national Kennel Club as well as on the breed association level. His contributions to both the hip dysplasia and patellaR luxation programs have significantly reduced the disease incidence of the breeds participating in the programs.

Prof. Meutstege was well known and highly respected in the German veterinary communities. For many years he was a member of both the Frankfurter- and the Hohenheimer Kreis (and since 1995 the successor "Gesellschaft für Röntgendiagnostik genetisch beeinflusster Skeletterkrankungen e.V” ) and for over 20 years he was a member of the Collegium Chirurgicum Veterinarium, a group of mainly private practitioners specialized in orthopedic surgery dating back to the days that specialty colleges did not yet exist.

In 1986 he decided to make use of an opportunity for early retirement from the Utrecht University and soon after became a part-time professor at the Tierärztliche Hochschule (TiHo) in Hannover. He continued his involvement for the Dutch Cynology and until the age of 70 has been consulting orthopedic surgeon at the Diergeneeskundig Centrum Noord Nederland in Emmeloord to support Dr. Krijn Van Muiswinkel and his team. In Hannover he introduced the stifle stabilization technique that is known as “the Meutstege technique” until today.

Very much to his own frustration and dismay, Freek’s health declined during the past couple of years. He died in the early hours of November 11 less than 24 hours after being hospitalized. During a meeting in Utrecht of over 200 colleagues interested in veterinary orthopedics his contributions were commemorated and he was remembered for his unique personality and surgical craftsmanship, as well as for his contributions as a co-founder of modern orthopedic surgery. During the funeral service on November 17 in Utrecht, a large number of his family members, friends and many colleagues joined to pay tribute and to say a last farewell to Prof. Freek Meutstege.