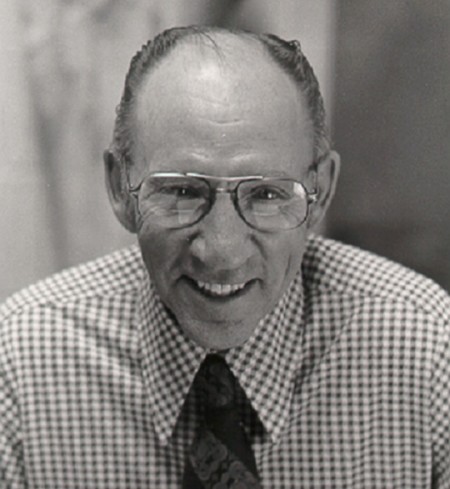 A graduate of Kansas State University, Dr. Brinker joined the faculty of Michigan State University in 1939, but served in the U.S. Army Veterinary Corp (1942-1946) . Subsequently returning his position in Michigan S.U. he had a long and distinguished career. A quiet and gentle person, much admired within the profession, he endeared himself to those with whom he worked and taught, be they at Universities or Conferences. He was at his best when he listened to young graduates speaking at meetings. There he was always asked for his comments. He would thank and encourage the speaker – and then quietly add a ‘pearl of wisdom’ from his own experience.

Known for his expertise in small animal orthopaedic surgery he co-authored ‘Handbook of Small Animal Orthopaedic Surgery and Fracture Repair’ and helped to introduce the concepts of intramedullary pinning in fracture repair and later the principles of the Association for the Study of Internal Fixation (aka AO). Following his retirement from MSU in 1978, he lectured and consulted at the Tuskegee University School of Veterinary Medicine.

Few, if any, veterinarian have received as much recognition and plaudits for their contributions to the profession as did Dr. Brinker. To mention a few organisations: Michigan V.M.A, Kansas State University, President and distinguished member Michigan VMA and others for teaching and research. In his honour, in 1978 the MSU established the ‘Wade Brinker Endowed Chair in Veterinary Surgery’, and he was named ‘Distinguishes Postdoctoral Alumnus’ in 1988.  He was also honoured in 2009 by an ‘International Symposium’ in his name in 2009 featuring ‘Milestones in the Development of Veterinary Surgery Speciality and ACVS’.

Dr. Wade Oberlin Brinker passed away suddenly on August 8th, 2008 a few days after hip surgery and just two months before his 96th birthday.  Dr. Brinker was a founding Diplomate of the American College of Veterinary Surgeons and the first President of the Veterinary Orthopedic Society.

As a 1939 graduate of the Kansas State University Veterinary School, Dr. Brinker was an integral participant in the “birth” and development of veterinary orthopedic surgery.  Along with his early professional colleagues (Schnelle, Schroeder, Paatsama, Vierheller, Archibald, Rudy, and Jenny), Dr. Brinker helped introduce the fundamental principles of intra-medullary pinning and fracture fixation that are still practiced today in veterinary surgery. His surgical procedures for various joint problems have stood the test of time and remain mainstays in the surgical arsenal of most small animal orthopedists.

As the practice of veterinary orthopedics evolved, Dr. Brinker was once again at the forefront, introducing the concept of rigid internal fixation and the principles of the AO/ASIF. He was an important fixture in the international AO community lecturing all over the world on veterinary orthopedics and continued to do so well into his 70’s. His textbook on small animal orthopedic surgery with Gretchen Flo and Donald Piermattei remains a classic and should be required reading for all veterinary students.

Dr Brinker was also a founding member of the Veterinary Orthopedic Society and served as its first president (1974-76).  He saw the importance of broadening our surgical perspective and was instrumental in bringing physicians such as the late Howard Rosen MD into the society to share their expertise.

The real testimony to Dr Brinker is that he has achieved his revered status in veterinary surgery not only because of his many surgical innovations, but also from a lifetime of dedication to teaching the principles and procedures of veterinary surgery to literally generations of students, interns, and residents. Indeed, the list of surgery residents mentored by Dr Brinker reads like a who’s who of veterinary surgery and the ACVS. Therefore, it was not surprising that literally thousands of his grateful students came forth to honor Dr. Brinker’s many contributions to veterinary surgery by creating the Wade O. Brinker Endowed Chair of Veterinary Surgery at Michigan State University. The first such chair in all of veterinary medicine and a fitting tribute to one of the true giants of the profession.

Dr. Brinker always represented his profession, the American College of Veterinary Surgeons, and Michigan State University in the highest standards. He spent his entire professional career advancing the art and science of veterinary surgery around the world and has been a respected cornerstone of the American College of Veterinary Surgeons for over 40 years. Dr Brinker will forever remain, the “father” of small animal orthopedic surgery.

Dr. Brinker was the consummate gentleman in every sense of the word. He was as genuine as they come and everyone who knew him can attest to the fact that he never put on airs or pretended to be more than he was.  Indeed, Dr. Brinker often seemed ill at ease with his iconic stature in the profession.  He always deferred praise to his colleagues and students and always took great pride in their accomplishments.  Dr. Brinker was a loving and devoted husband to Eleanor and a caring and dedicated father to Judy, Jerry, and Jack, who is also a veterinarian, (MSU, 82).

Dr. Brinker quietly and unassumingly navigated life’s many transitions with unparalleled dignity, grace, and humility and taught us all the virtues of a life well-lived. Simply put, Dr. Wade O. Brinker was the finest human being most of us will ever have the honor of knowing.