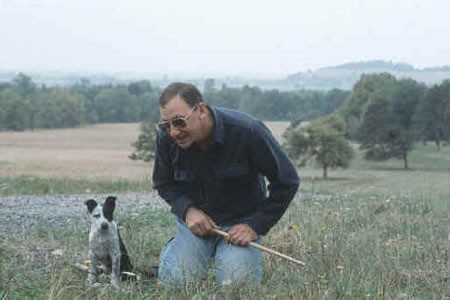 Barclay Slocum was a very special person… a gentle, quiet, very private person who played it fairly ‘close to the vest’. He functioned on a different plateau and listened to a different drummer than most. When corporations are making one, five and ten year plans they encourage their ‘think tank’ personnel to try to think ‘outside of the box’. Barclay seemed to think outside of the box as a matter of routine. This was one of the traits that seemed to distinguish him from some of the previous greats of veterinary orthopedics. He was always pushing the edge of the envelope…. sort of the Chuck Yeager of veterinary orthopedics. Barclay had the courage and fortitude and belief in what he thought was right to go against the tide and continued to work for the things he believed in when many others were saying, ‘this doesn’t sound right’.

He was a bit of a Renaissance man in that he was a student of physics and math, a farmer of sorts, an inveterate inventor, a non-judgmental teacher, a considerate colleague who appreciated the thoughts and works of others and gave appropriate credits, an author and worldwide lecturer. He was a veterinary orthopedist in private practice, and contributed more to the advancement of our clinical understanding of the ACL deficient canine stifle than anyone since the early works of Saki Paatsama. He was instrumental in the formation and continued advancement of AVORE (Association for Veterinary Orthopedics Research and Education) and was honored by the members. He was co-editor of the fourth edition of Current Techniques in Small Animal Surgery, had over sixty publications and over four times that number of lectures to his credit. Awards received include the AAHA Outstanding Practitioner Research Awards, University of Oregon Profiles in Achievement Awards, and the prestigious AVMA Practitioner Research Award among others.

The TPLO (tibial plateau leveling osteotomy) has been performed and proposed by Barclay as a method of eliminating the cranial tibial thrust that is present in ACL deficient knees. By chance or design the procedure was initially taught to a small group of AVORE surgeons, the result of which was to minimize the incidence of technical failures allowing the TPLO method to stand or fall on its own merits. The growth of the TPLO as a procedure was rather slow…primarily because of the reluctance/inability of the average competent veterinary orthopedist to make the “leap of faith” from the traditional (anatomically based) procedures to the new (force driven) technique. The leap was particularly difficult in the early years, prior to peer group approval. However, once the leap was made, there was no turning back. Virtually no one, after having successfully performed a TPLO in the large breed of dog reverts back to offering the traditional options.

The rest is history: From the “full house” presentations at the most recent ACVS meeting in San Francisco by Christine Warzee and Peter Schwarz, to lectures and labs at the ESVOT (European Society of Veterinary Orthopedics and Traumatology) meeting in Munich, 2000; the TPLO currently is being embraced by much of the veterinary orthopedic community.

Although, seeming most alive when performing or teaching veterinary orthopedics, Barclay was fiercely loyal to and concerned about the welfare of his family and their Future and frequently spoke affectionately of them to friends. He believed in a helpmate for life as evidenced by his continued devotion to Theresa Devine Slocum who greatly assisted him in his many projects, lectures, life, and final time.

Things that I remember most were: the fireside chats during a camping/fly fishing trip down the middle fork of the Salmon River with Barclay, Theresa, and my wife Brenda. Barclay catching an alligator while fly fishing for bass in the Everglades with Theresa, and playing horseshoes. I especially remember my final course with Barclay in Eugene, Oregon in February. Bob Olds, myself, Ken Sinabaldi and Gary Brown took notes and asked questions as Barclay lectured and dissected. Barclay was down 70 lbs and now sat while he lectured. When we went to lunch Barclay went to radiation therapy. It was the last time I saw Barclay. He never quit teaching; he gave at least one more course in Eugene, but now being even weaker, a colleague/participant had to assist with the dissections. But the thing I remember most is….he was my friend and I and many others will miss him.